First off, go play with it. You'll need a browser with Web Audio. I think you might enjoy composing a song or two.

Now that you are back, I can tell you a story all about how I made this thing.

Why did you make this?

I recently bought a new phone. It is a Nokia 1100b. I bought it because I wanted a phone with a monochrome (sunlight readable, high contrast) screen and excellent battery life. (The Nokia 1100 models get "up to 400 hours" of standby battery life.) Also, they still make new batteries for this phone: that was another important consideration. I also wanted a ringtone composer. The 1100 was still being sold new for TracFone until recently, so I picked up a brand new one off of eBay.

Anyhow, at first I set out to make a Unix program that you send text to and it makes your PC speaker beep. I stopped when I thought that that wouldn't be that cross-platform and I discovered something called Web Audio. Like my GPGPU project, this was a way to make something cross-platform with hot new web technologies. But most importantly, it was a way to synthesize any sound I wanted! PC speakers don't sound much like any monochromatic Nokia phones, you know. So that's what I set out to make this thing.</p>

At first, it was just a simple page with an image of an 1100 on it. When you load the page, it played a song. This was a bit boring, so I made the whole thing interactive. Gradually, it got more and more like the real phone until it became the horrible skeuomorphic ringtone player you see today. 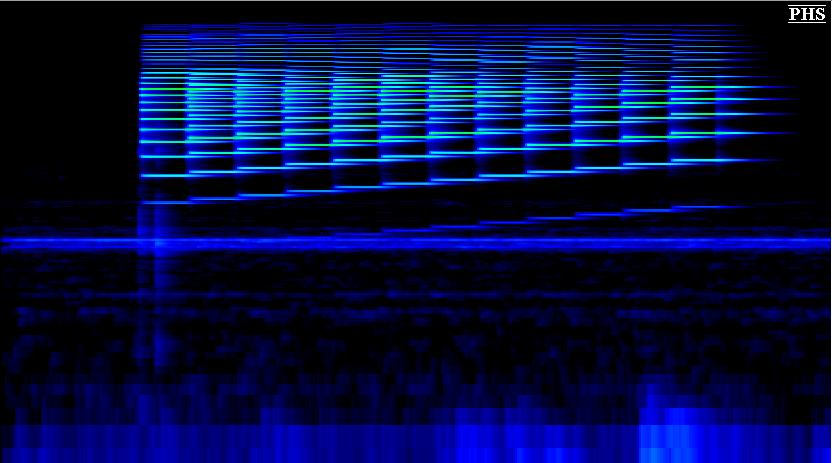 I looked at a spectrogram of some recordings I made of my Nokia 1100b playing back the chromatic scale. I didn't see much of interest in the frequency domain, so I had a look in the time domain. Each note looked like a damped sine wave. After trying to take the Fourier transform of an equation for a damped sine wave and failing (as I've been away from math for too long), I just used SpectraPLUS to take an FFT of a single note. I then popped those coefficients into a Web Audio oscillator's wave table and bam, a nice Nokia sound.

Pokia? I thought it was Nokia?

Pokia is Patater's Nokia. It is a portmanteau. And don't end non-questions in question marks, silly.

If you didn't notice, it does have some limitations, unfortunately. On a real phone, you'd have to navigate some menus to change the tempo or even to play the song. I wanted to have a simpler interface, so some sacrifice was thought necessary. Feel free to complain about it.